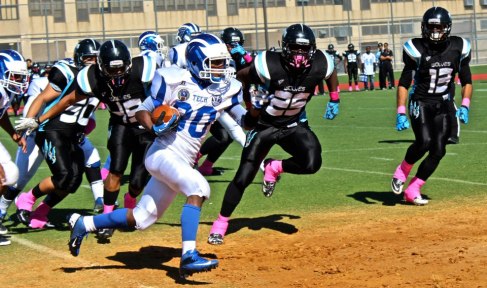 Tristan Brown is the winner of the AJC Scholarship

– On January 11th, at the Annual Brooklyn Tech Football Awards Banquet, Tristan Brown was announced as this year’s winner of the Adam J. Cirillo Scholarship. Tristan will receive $20k over the next 4 years of college.   Tristan is currently being recruited by a number of schools and recently went on an official football visit to Ithaca College. Tristan was named All-Conference by the New York City Football Coaches Association and was named to the Brooklyn 44 select team.

– Deon Mash, named All-Conference by the New York City Football Coaches Association, will accept an offer of a full scholarship to LIU-CW Post (NCAA Division 2). He will play wide receiver for the Pioneers.

– Chawit Bunditwong, Tech middle linebacker, was named to the 2013 New York City Football Coaches Association All-City Team.  The designation recognizes him as one of the top 37 football players in the Public School Athletic League.  He is the sixth Tech linebacker to go All-City in the last five season.  Special congratulations to his LB coach and Defensive Coordinator, Coach Brown.

– The Vesting Period began on January 22, 2014. The first Vesting period runs until April 1st, at which time players will be evaluated based on hours spent working in the weight room, academic and disciplinary accountability, and other criteria. Vested players will once again wear the patch on their jersey for the 2014 season.