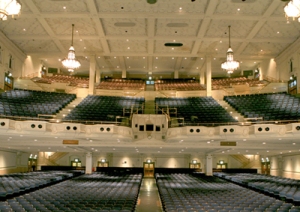 Brooklyn Tech is a specialized high school in New York City.  Admission is by competitive examination though, as a public school, there is no tuition fee and only residents of the City of New York are eligible to attend.[7]

Brooklyn Tech is a founding member of the National Consortium for Specialized Secondary Schools of Mathematics, Science and Technology. Brooklyn Tech is noted for its famous alumni[8](including two Nobel Laureates), its academics, and the large number of graduates attending prestigious universities. Routinely, more than 98% of its graduates are accepted to four-year colleges[9] with the 2007 graduating class being offered more than $1,250,000 in scholarships and grants.[10] It appears as #63 in the 2009 ranking of the annual U.S. News & World Report “Best High Schools” list.[11] In 2011, Brooklyn Tech was ranked by U.S. News & World Report among the top 50 of the nation’s Best High Schools for Mathematics and Science.[12]

Brooklyn Tech’s Auditorium is the second largest in New York City (Radio City is bigger) at a capacity of 3500.  The current population of Brooklyn Tech is 5765 students.